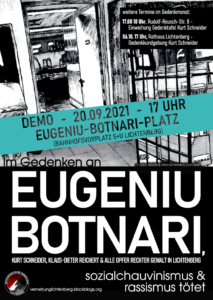 17.08.2021 | 12 p.m. | Rudolf-Reusch-Straße 8 | Official dedication of the memorial plaque for Kurt Schneider by the district of Lichtenberg

20.09.2021 | 5 p.m. | Eugeniu-Botnari-Platz at S+U Lichtenberg (exit Weitlingstraße) | Anti-fascist demonstration “In memory of Eugeniu Botnari – Nazis out of the neighborhood!”

An antifascist neighborhood needs an antifascist culture of remembrance. That is what we are demonstrating for. We want to remember the victims of right-wing violence in Lichtenberg. Eugeniu Botnari and Kurt Schneider are two people we remember as representatives of unknown victims of right-wing violence. Unfortunately, their names are also unknown to many people in the neighborhood. We have to change that. We are committed to making their fates visible in the district. We demand places of remembrance that show the deadly consequences of right-wing ideas every day. Let’s fight together for these places and a neighborhood in solidarity.

On September 17, 2016, Eugeniu Botnari, at the age of 33, was beaten up and dangerously wounded in the Edeka store at the Lichtenberg train station by the store manager at the time. He died of his injuries three days later. He had previously been accused of theft. The allegation was never proven and it by no means constitutes a reason to fatally injure a person. Still, the allegation has been enough for many media outlets to spread it. Their stories stigmatized Botnari beyond his death. The true background of the crime emerged at the trial. The perpetrator had no sympathy for Eugeniu Botnari because he devalued him due to his ascribed status as a homeless person from Moldova. Thus, social chauvinism and racism led to his death. The attacker was able to leave prison after a year and a half. Eugeniu Botnari will never come back. Five years have passed since the crime. It is time for the district to take responsibility. We demand the renaming of the so far nameless station forecourt after Eugeniu Botnari as a victim of right-wing violence. A corresponding application has been lying unprocessed in the Lichtenberg district office for half a year. Now it is enough. Lichtenberg needs a Eugeniu Botnari square in the center of the Weitlingkiez.

On the night of October 6, 1999, Kurt Schneider was murdered by neo-Nazis at the age of 38. His abusers guided him to the former urn cemetery on Hoenerweg and stabbed him to death there. Schneider had to die because the neo-Nazis saw in him an alcoholic unemployed man. Dehumanization on the basis of social-chauvinist ideas is a core element of fascism. But there was no lobby for Schneider in Lichtenberg society either. He was forgotten. Only 19 years after his death was he officially recognized as a victim of right-wing violence. In recent years, we fought for a memorial plaque for Kurt Schneider at the site of the fatal assault. Now it will finally be installed.

The memorial plaque is a first step towards giving Schneider a place in the neighborhood again as a victim of neo-Nazi violence. Now more steps must follow. There are more victims of right-wing violence in Lichtenberg. Some names are known, but there is a lack of official recognition, as in the case of Klaus-Dieter Reichert. However, the number of unreported cases in the district is unknown. Together, we must work to bring their fates back into the public eye. In the past ten years, right-wing structures could be pushed back from Lichtenberg. We must build on this together in order to permanently prevent right-wing acts of violence. Come to the anti-fascist demonstration on September 20, 2021 and support the further commemoration actions.